After an arduous quest for yellow boots, I would just like to point out two things 1) the taped up versions looked awesome (see picture) and 2) this is the only picture I’m tagged in where you can even SEE the boots, and Dana’s not even wearing hers (and mine are cut off). So, props to Kristen for showing off the boots (although now that I think of it, she kept wearing them even after the rest of the costume was removed, so there are probably a lot of pics showing her in boots).

In summary, Curator’s Ball 2008 was AMAZING, we spent waaaaaay too much time/effort/money procuring yellow boots, and just so he doesn’t feel left out, here’s a sweet picture of Zach (yeah, readers won’t think he’s so smart NOW): 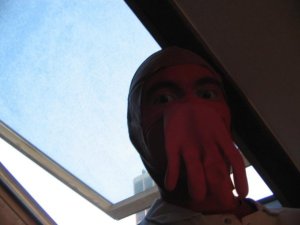