The December issue of Current Biology has a short summary about collaborations between the palm oil industry and conservationists to preserve orangutan (Pongo pygmaeus) habitats in Borneo. As the palm oil industry has burgeoned, orangutan populations have lost contact due to deforestation for industry and agriculture. Apparently palm oil companies have made an agreement with the government of the Malaysian state of Sabah in Borneo, in which the companies will help construct corridors that will reconnect isolated populations of the orangutan. 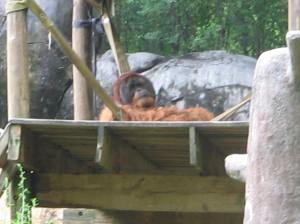 Lethargic orangutan at the Zoo Atlanta, in Hottlanta GA. He was cool but boring because he didn’t do anything.

Good to see cooperation rather than conflict between conservationists and industries. Let’s hope it proves beneficial for the endangered orangutans.

Assuming the project works out, it will be interesting to see population genetics and behavioral studies documenting the results of renewed contact and gene flow of these erstwhile isolated apes. Since the prior isolation and future reconnection are anthropogenic, or due to human activity, it will be an interesting (and hopefully not too depression) lesson about how human behavior affects biodiversity.

One thought on “Pongo amidst conservation and industry”