I made the unfortunate discovery last weekend that Google Earth has not just badass satellite photos of our home planet, but also really badass maps of places we’re ready to colonize: The Moon, Mars, and The Stars. Clearly I’m never going to get any real work done ever again.
Everything extraterrestrial has blown my mind for as long as I can remember. I have always been bothered by the fact that there are things in the universe of such superlative scale that I cannot imagine the amount of matter involved. [Warning the following information comes from WolframAlpha and Wikipedia, so I could be off on some figures]

On the one hand, life is small. Cells can be small enough such that a human body is comprised of an estimated 10 trillion of them. The DNA basepairs within cells are small enough that there are 3 billion in each cell’s nucleus (the small green bits within the DNA helix in the picture). That’s tiny. (image: Molecular Expressions)
But then on the other hand, there are things whose sheer size is just stupefying. Earth’s diameter averages around 7900 miles. We are located on average about 93 million miles from the Sun, which itself is over 864,000 miles in diameter. Outside our solar system, the closest star to us is Proxima Centauri, which is 4.2 light years away from the Sun. 4.2 light years means it takes light 4.2 years to travel the mere 25 trillion miles between the two stars. At a much grander scale, we are part of the Milky Way galaxy, which is an estimated 590 quadrillion miles across (quadrillion = 1 million billion). 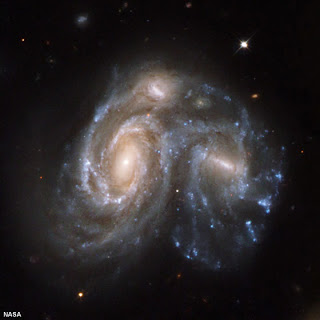 Wikipedia tells me there are an estimated 200 billion additional galaxies vying against ours for the title of “Sweetest Galaxy.” But galaxies are gregarious – the Milky Way is part of the “Local Group” (which I’m sure is like the cool kids’ table as far as galaxies go), comprised of around 30 other galaxies, and spanning some 58 quintillion miles (or in other words, 58 billion billion miles). More infuriating, these groups and clusters of galaxies themselves aggregate into “superclusters,” the most colossal cosmic conglomerates in the universe (though these aren’t bound together by gravity, so I guess they shouldn’t really count in a way). Our Local Group is part of the larger Virgo supercluster, which is an estimated 110 million light years across, or 65 quintillion miles.
The image at the right contains two galaxies from the Hercules Galaxy Cluster who were best buds, until they came to blows and literally collided with one another (image: geology.com). Could anything possibly be more epic than a galaxy fight? No.
So our bodies are comprised of countless bits of small matter, myriad micrometric molecules executing our basic vital functions. At the opposite end of the size spectrum, galaxy clusters are made up of a stupid sum of stars, more numerous and more massive objects than the scads of cells in our bodies. Baffling.