No, I’m not looking for people with lithe limbs to be photographed for money. Much more sexily, I’m referring to a recent paper (Pietak et al., 2013) that’s found that the relative length of the segments of human limbs can be modeled with a log-periodic function:

In other words, within a limb, the length of each segment is mathematically fairly predictable on the basis of the segment(s) before and after it. As the authors state, “Being able to describe human limb bone lengths in terms of a log-periodic function means that only one parameter, the wavelength λ, is needed to explain the proportional configuration of the limb.”

The biological significance of this pattern is difficult to discern. The length of a limb segment is determined by a number of factors, including the spacing between the initial limb condensations embryonically, and thereafter the growth rates and duration of growth at proximal and distal epiphyses. As a result, limb proportions aren’t static throughout life, but change from embryo to adult. For instance, here are limb proportion data for the coolest animal ever – gibbons! – from the great anatomist Adolph Schultz. 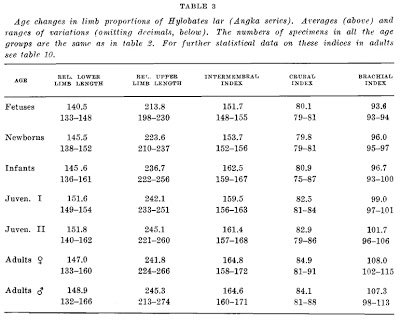 An important question, and follow-up to Pietak et al’s study, is whether human limb proportions can be described by such log-periodic functions throughout ontogeny, and if so how these change. Plus, it’s also not clear to what extent human proportions might happen to be describable by log periodic functions, simply because each segment is shorter than the one preceding it proximally. In short, this study raises really interesting and pursuable questions about how and why animal limbs grow to the size and proportions that they do.