The last year and a half was a whirlwind, and so I never got around to blogging about the fruits of my dissertation: Mandibular growth in Australopithecus robustus… Sorry! So this post will be the first installment of my description of the outcome of the project. The A. robustus age-series of jaws allowed me to address three questions: [1] Can we statistically analyze patterns of size change in a fossil hominid; [2] how ancient is the human pattern of subadult growth, a key aspect of our life history;  and [3] how does postnatal growth contribute to anatomical differences between species? This post will look at question [1] and the “zeta test,” new method I devised to answer it.

Over a year ago, and exactly one year ago, I described some of the rational for my dissertation. Basically, in order to address questions [2-3] above, I had to come up with a way to analyze age-related variation in a fossil sample. A dismal fossil record means that fossil samples are small and specimens fragmentary – not ideal for statistical analysis. The A. robustus mandibular series, however, contains a number of individuals across ontogeny – more ideal than other samples. Still, though, some specimens are rather complete while most are fairly fragmentary, meaning it is impossible to make all the same observations (i.e. take the same measurements) on each individual. How can growth be understood in the face of these challenges to sample size and homology?

Because traditional parametric statistics – basically growth curves – are ill-suited for fossil samples, I devised a new technique based on resampling statistics. This method, which I ended up calling the “zeta test,” rephrases the question of growth, from a descriptive to a comparative standpoint: is the amount of age-related size change (growth) in the small fossil sample likely to be found in a larger comparative sample? Because pairs of specimens are likelier to share traits in common than an entire ontogenetic series, the zeta test randomly grabs pairs of differently-aged specimens from one sample, then two similarly aged specimens from the second sample, and compares the 2 samples’ size change based only on the traits those two pairs share (see subsequent posts). Pairwise comparisons maximize the number of subadults that can be compared, and further address the problem of homology. Then you repeat this random selection process a bajillion times, and you’ve got a distribution of test statistics describing how the two samples differ in size change between different ages. Here’s a schematic:

The zeta statistic is the absolute difference between two ratios – so positive values mean species A  grew more than species B, while negative values mean the opposite. If 0 (zero, no difference) is within the great majority of resampled statistics, you cannot reject the hypothesis that the two species follow the same pattern of growth. During each resampling, the procedure records the identity and age of each specimen, as well as the number of traits they share in common. This allows patterns of similarity and difference to be explored in more detail. It also makes the program run for a very long time. I wrote the program for the zeta test in the statistical computing language, R, and the codes are freely available. (actually these are from April, and at my University of Michigan website; until we get the Nazarbayev University webpage up and running, you can email me for the updated codes)

The zeta test itself is new, but it’s based on/influenced by other techniques: using resampling to compare samples with missing data was inspired by Gordon et al. (2008). The calculation of ‘growth’ in one sample, and the comparison between samples, is very similar to as Euclidean Distance Matrix Analysis (EDMA), devised in the 1990s by Subhash Lele and Joan Richtsmeier (e.g. Richtsmeier and Lele, 1993). But since this was a new method, I was glad to be able to show that it works!

I used the zeta test to compare mandibular growth in a sample of 13 A. robustus and 122 recent humans. I first showed that the method behaves as expected by using it to compare the human sample with itself, resampling 2 pairs of humans rather than a pair of humans and a pair of A. robustus. The green distribution in the graph to the left shows zeta statistics for all possible pairwise comparisons of humans. Just as expected, that it’s strongly centered at zero: only one pattern of growth should be detected in a single sample. (Note, however, the range of variation in the green zetas, the result of individual variation in a cross-sectional sample)

In blue, the human-A. robustus statistics show a markedly different distribution. They are shifted to the right – positive values – indicating that for a given comparison between pairs of specimens, A. robustus increases size more than humans do on average. 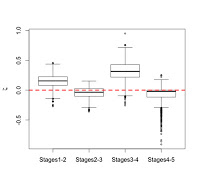 We can also examine how zeta statistics are distributed between different age groups (above). I had broken my sample into five age groups based on stage of dental eruption – the plots above show the distribution of zeta statistics between subsequent eruption stages, the human-only comparison on the left and the human-A. robustus comparison on the right. As expected, the human-only statistics center around zero (red dashed line) across ontogeny, while the human-A. robustus statistics deviate from zero markedly between dental stages 1-2 and 3-4. I’ll explain the significance of this in the next post. What’s important here is that the zeta test seems to be working – it fails to detect a difference when there isn’t one (human-only comparisons). Even better, it detects a difference between humans and A. robustus, which makes sense when you look at the fossils, but had never been demonstrated before.

So there you go, a new statistical method for assessing fossil samples. The next two installments will discuss the results of the zeta test for overall size (important for life history), and for individual traits (measurements; important for evolutionary developmental biology). Stay tuned!

Several years ago, when I first became interested in growth and development, I changed this blog’s header to show this species’ subadults jaws – it was only last year that I realized this would become the focus of my graduate career.

“This is very beautiful. It is neat, it is modern technology, and it is fast. I am just wondering very seriously about the biological validity of what we are doing with this machine.” – Melvin Moss, 1967*

“This machine” to which Moss referred nearly 50 years ago was not a contraption to clone a Neandertal or a Godzilla-like MechaGodzilla, but a computer. Along these lines, a paper came out recently describing a new, automated method for analyzing (biological) shapes, and while I think the method is pretty sweet, I think future researchers employing it should keep Moss’s monition in mind.

Doug Boyer and colleagues (2011) present “Algorithms to automatically quantify the geometric similarity of anatomical surfaces.” It seems the main goals of the study were to make shape analysis [1] faster and [2] easier for people who don’t otherwise study anatomy (such as geneticists), making it possible [3] to amass large phenotypic datasets comparable to the troves of genetic data accumulated in recent years. Using some intense math that’s way over my head, the computer algorithm takes surface data (acquired through CT or laser scans) of a pair of specimens and automatically fits these forms with a “correspondence map” linking geometrically (and not necessarily biologically) homologous features between the two. It then uses the map to fit landmarks (a la geometric morphometrics) which are used to calculate the shape difference metric between individuals in the pairings.

See at the right just how pretty it is! The authors posit that this technique could be used with genetic knock-out studies to assess how certain genes affect the development of bones and teeth, or to model the development of organs. That certainly would be useful in biomedical and evo-devo research.

But while I appreciate the automated-ness of the procedure, I don’t think we can simply write off the role of the biologist in determining what features are homologous, in favor of a computer. The paper itself illustrates this nicely. The authors state that there is debate about the origins of a cusp on the molar tooth of the sportive lemur (Lepilemur) – is it the same as the entoconid of the living mouse lemur, or the enlarged metaconid of the extinct “koala lemur”? Their automated algorithm can map the sportive lemur’s mystery cusp to match either alternative scenario. It is the external paleontological and phylogenetic evidence, not the intrinsic shape information, that renders the alternative scenario more plausible.

So let me reiterate that I think this paper presents an important step for the study of the biology of form, or the form of biology. Automating the analysis of form will certainly expedite studies of large datasets (not to mention freeing up the time of hordes of research assistants). But I hope that researchers employing this procedure will have a little Mossian Angel (poor play on “guardian angel,” sorry) on their shoulders, reminding them that the algorithm won’t necessarily show them homology better than their own experience. And I hope all biologists have this Mossian Angel there, reminding them that even though this method is “neat … modern technology, and … fast,” it may not be the most appropriate method for their research question.

*This quote comes from a discussion at the end of a symposium: Cranio-Facial Growth in Man (1967). RE Moyers and WM Krogman, editors. New York: Pergamon Press.

People would probably like statistics more if the Mahalanobis D 2 statistic was “Ma-Hall-and-Oates-bis” D 2.

I’d made this observation on Facebook a few months ago, but was reminded of it recently when reading about the statistic. Mahalanobis D 2 is a statistic that describes how similar two sets of variables are. In physical anthropology it has often been used to compare shapes of skulls. That is, it has been used to compare the morphological ‘distance’ between pairs of crania, with various inter-landmark distances as variables. This can be problematic, because the statistic is dependent upon the variance-covariance matrix of the sample under study; it has been pointed out often that this variance-covariance matrix cannot really be known or computed for fossil samples, because they’re generally too small, or do not preserve all the same variables.