The genome of the naked mole rat (Heterocephalus glaber, below right) has been sequenced (Kim et al. 2011), shedding insight into how mammalian evolution made gross.

Here are some factoids about these murine monsters, from a nice editorial accompanying the research paper in Nature. These critters live in underground colonies – because who could suffer to see them on the surface? These bald rats are unique among mammals in that they are “eusocial” like bees or ants. Also like bees and ants, a colony has a single, breeding “queen” in the group, whose mere presence prevents other female mole rats from becoming sexually mature. When a queen dies, females fight for the vacant throne. When one wins and becomes the new queen, she subsequently undergoes a “growth spurt,” becoming up to 80% heavier and dramatically lengthening her lower spine (Dengler-Crish and Catania 2007; figure below) – a marvel of phenotypic plasticity. These rats dwell in crowded, dirty tunnels low in light and oxygen; it’s kind of like Los Angeles. Plus, they can live for up to 30 years, which is an amazingly long time for an animal so small you can hold in it your hand. They are also apparently resistant to cancer and to some kinds of pain and itching. So, so strange. 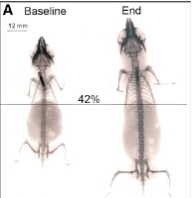 With only one female contributing half a generation’s genes, you can imagine the shamelessly-naked mole rats are a little more inbred than most of us. In spite of this potential drag to genetic variation (and thereby natural selection), the naked mole rat genome demonstrates a number of adaptations to the species’ peculiar lifestyle. For example, the genes TEP1 and TERF1, which have been implicated in determining the lengths of the ends of chromosomes (“telomeres“), show evidence of positive natural selection in the mole rat. Kim and colleagues (2011: 2) say their analyses “point to altered telomerase function … which may be related to its evolution of extended lifespan and cancer resistance.” Cancer resistance!? I think the paper’s final paragraph (p. 4) lays out nicely what’s most important about research into the genome of this most ghastly rodent:

To summarize, sequencing and analysis of the [naked mole rat] genome revealed numerous insights into the biology of this remarkable animal. In addition, this genome and the associated data sets offer the research communities working in ageing, cancer, eusociality and many other areas a rich resource that can be mined in numerous ways to uncover the molecular bases for the extraordinary traits of this most unusual mammal. In turn, this information provides unprecedented opportunities for addressing some of the most challenging questions in biology and medicine, such as mechanisms of ageing, the role of genetic makeup in regulating lifespan, adaptations to extreme environments, hypoxia tolerance, thermogenesis, resistance to cancer, circadian rhythms, sexual development and hormonal regulation.

It’s not news that Life on Earth can be pretty weird sometimes. Understanding how Life became and becomes weird can provide us with tools to make life better for people.