A study just came out in Science showing that the water cycle – the process of water being evaporated to the atmosphere, condensed into clouds, and returned to Earth as rain – has sped up dramatically in just the past 50 years (Durack et al. 2012). From news coverage of the research (Kerr 2012), here’s a reason why this speed-up sucks and has the potential to suck more:

Such a revved-up water cycle would have “a lot of implications for how extreme events would change in a warming climate,” says meteorologist Brian Soden of the University of Miami in Florida. Water cycling from the surface to the atmosphere carries heat energy that can ultimately fuel violent storms, from tornadoes to tropical cyclones. The faster water cycles, the more abundant and more violent those storms might be. And wet places getting wetter can lead to more severe and more frequent flooding. Dry places getting drier would mean longer and more intense droughts.

Durack and colleagues’ findings are important because they show just how rapidly and drastically the Earth is changing, right before our eyes. Unlike humans, most plants and animals are adapted to fairly specific ecological circumstances, and departure from the norm can spell extinction, especially in long-lived, slow-reproducing species. We humans are adept at altering our environment to our likings, and until recently we’ve managed to avoid (or at least be ignorant of) the consequences of our earthworks. This is serious stuff that we can actually do something about, but only if we make scientifically-informed decisions.

I don’t know that I’ve ever gotten political on this blog, but I’d like to stress now that climate change is an issue people should be thinking about in this election year. The Republican primaries have largely been centered around shitshow discussions of straw man issues and Dominionist fluff – it would have been laughable if none of those clowns were seriously trying to become the president. But now that Romney will be the Republican candidate to run against Obama, hopefully debates will come down to real world issues. (Read more about the role of climate change in candidates’ campaigns here at the Huffington Post)

UPDATE 02 SEPTEMBER – Nope. The Republican National Convention was just held in Tampa, FL, where Mitt Romney mocked Obama’s pledge to address climate change (not as bad as critics made him sound). Mitt and his running mate Paul Ryan have insisted for the past few weeks that they’d bring solutions to the issues they say Democrats have failed to address, yet these Republican candidates have continuously lied about the past and been deplorably vague about how they plan to improve America. It will be upsetting on several levels if these buffoons end up in the White House.

Nope! In an effort to reduce plastic water bottle waste, UM has been installing these badass water fountains around campus that automatically fill a bottle – I suppose it could fill a shoe, too – and tell you how many plastic bottles they’ve saved you from wasting. I have to say they’re pretty convenient… 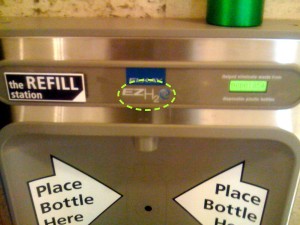 … and repressive? I noticed the contraption is named “EZH2O.” Of course, Elkay meant ‘easy H2O,’ but I just took an epigenetics seminar where we learned about EZH2, a key enzyme in the Polycomb Repressive Complex 2 (PRC2). EZH2 is key in catalyzing and maintaining the [tri-methylation if lysine 27 in the tail of histone 3 (written “H3K27me3”)] during mitosis (Hansen et al. 2008). At least I think that’s how it works (if anyone knows better, please correct me if I’m wrong!).
So, real quick, your chromosomes are made up of DNA wrapped around histone proteins. This is essential because with some 3 billion base pairs of DNA, if it weren’t packaged up nicely by histones it would be a HUGE MESS inside your cells. Anyway, these histones have ‘tails’ sticking out that can be modified in ways that basically allow genes to be turned on or off. This is significant because all of your DNA full of the Commands for Life is in every single one of your cells – yet not all genes are expressed. The addition of methyl-groups (methylation) to histone tails (as well as to DNA itself) is associated with gene silencing.
So when your DNA replicates during mitosis, EZH2 binds to H3K27, and slaps that tri-methyl mark to it, effectively telling the gene(s) in the region to ‘shut up’ so they don’t get transcribed (Hansen et al. 2008). This way, your liver cells stay hepatic, your kidney cells renal, and your soul cells funky. It’s apparently also critical in silencing HOXD and other during early development (Tsai et al. 2010). (Again, I’m not a molecular biologist so please someone correct me if I’m wrong!)