I recently returned from Mangystau, a geologically captivating former seabed in West Kazakhstan. Places like this, or the Tien Shan mountains in the South and Altai mountains in the East, always make me wonder why anyone would decide to build a capital city in the wastes of Aqmola. Astana sprouts up from a sterile steppe, sparingly sprinkled with streams and lakes. Out west, though, are breathtaking landscapes and landforms, such as the giant rocky spheres of Torysh:

Traversing the “Valley of Balls.” It is not yet known what caused these rock formations.

Sherqala (“Lion City”), a rocky uplift that centuries ago hosted a defensive acropolis:

A pile of earth that’s really an octopus waiting in ambush: 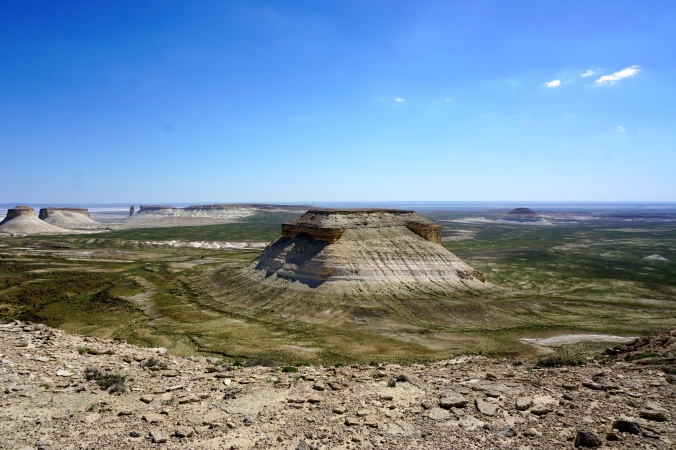 The perfect place to set up camp.

As I’d pointed out the first time I came out here last year, this rocky terrain is littered with lifeless remnants of the animals that used to call this place home. So many bones reflecting such biodiversity, just lying on the surface. This year, though, I found a subsurface skeleton, teaching an important lesson in taphonomy. Taphonomy (“burial law” from Ancient Greek) is the study of what happens to an animal’s remains from the moment it dies to when it is discovered eons later. This field examines geological and ecological processes that determine whether fossils are found intact or smashed to smithereens.

Walking down into a small gully by our campsite, I noticed some giant lumbar vertebrae eroding out of one side:

Waist-deep in mud. One vertebra is clearly visible, and to its right, beneath a rock, are the spinous processes of two more vertebrae. Notice the differently colored stripes of soil – these are different layers (“strata”), reflecting different periods that soil was laid down on the earth.

I was elated to espy this spinous surprise, but I wasn’t expecting to see what was on the opposite side of the gully:

Died doing a misguided impression of an ostrich. On the left you can see the back of the skull and the first cervical vertebra, then the spine submerges and reemerges to the right.

Sure enough, this once complete carcass was drawn and quartered, pulled apart by the liberal application of time and life-saving water.

Digging out the skull on the west bank, right across from the lumber spine on the east face (circled).

Getting our hands a little dirty, we found the face of a camel. It is hard to say how long ago it lived, how long it took to get buried by a few inches of dirt, but I would guess at most only a few decades (but I’m not a geologist, so who knows). It’s also unclear how this animal was bifurcated: Did the camel die and get covered over with soil, and then later a newly forming stream carried away the soil harboring its torso? Or did the carcass lie on the ground unburied for a while, its torso slowly picked apart or trampled, and then the stream formed? I would guess the first scenario is more likely, since the bones seem to run through several strata. But again I’m not an expert in taphonomy so I could be wrong. 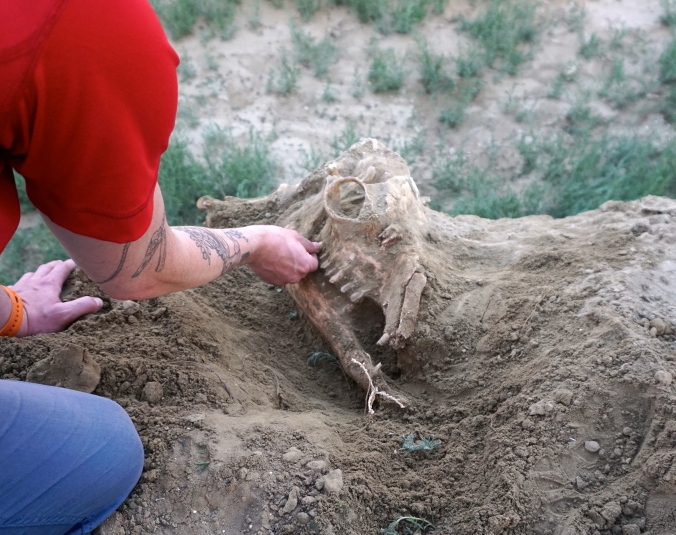 People often wonder why the fossil record isn’t more complete, and why we get so excited about the discovery of even partially complete skeletons. This camel demonstrates one of myriad taphonomic processes, one of the many ways that earth, water and time conspire tear the past asunder.

One of my favorite paleoanthropological sites is Dmanisi, in the Republic of Georgia. It is the oldest securely dated hominid site outside Africa (just under 1.85 million years ago), and the hominids found there display a neat mix of primitive Homo habilis and derived H. erectus features. I consider myself lucky to have had the opportunity to excavate at Dmanisi last year, and to return to Georgia (lamazi Sakartvelo! [I hope I translated that correctly]) for more fieldwork next month.
Recently, Reid Ferring and others (2011) described the results of excavations of M5, a section of the site a bit aways from the area where the hominids were found. M5 is pretty cool because it presents a nice geological “layer cake,” as Ferring described it to us: each of the strata (different layers of deposition) are nicely and evenly stacked on one another. Check out the labeled layers on the right of the figure, from Ferring et al. 2011:

This is in stark contrast to the jumbled strata (like ‘spaghetti’) where the hominids were found. In geology and archaeology, there is a general “law of superposition,” which states that the lowest layers in a sequence would have been deposited earlier than the layers above them. The A sediments at Dmanisi, as seen in the figure above, are thus older than the Bs. Hominids have only been found in the B sediments. But work at M5 has shown that stone tools are found in the older A sediments, meaning that hominids arrived at the site and used it continually, beginning just after 1.85 million years ago.
Tools from the site differ between the older A and slightly later (still older than 1.75 million years!) B sediments in both material and manufacture. As they say in the paper (p. 2/5), a major difference in tool manufacture between the strata A and B occupations could be that during the earlier A times, “either cores were more intensively reduced or selected flakes were made elsewhere and carried to the site.” I’m not sure why this may be, but it is neat that within a fairly narrow time span, researchers can see habits change in our early ancestors.
The authors also note that the older tools from A sediments indicate “that Eurasia was probably occupied before Homo erectus appears in the East African fossil record” (from the paper’s abstract). If only hominids also came out of the A sediments! The News is touting this as meaning H. erectus evolved in Eurasia and then some members of the ‘new species’ moved back into Africa, but I don’t think this is necessarily the case. The Dmanisi hominids are described as H. erectus, but lack some key H. erectus apomorphies (most notably a large brain size) and really look pretty similar to contemporary hominids in Kenya (such as KNM-ER 3733) and Tanzania (such as OH 16). Plus, the E. African hominid fossil record around 1.9 million years ago leaves some tantalizing hints at hominids more erectus-like than habilis-like, such as the ER 2598 occipital fragment.
So while Dmanisi definitely demonstrates the presence of hominids outside Africa earlier than most well-accepted “Homo erectus” (or “ergaster”) fossils in E. Africa, I don’t think they necessarily indicate that the species arose in Eurasia. Rather, what the fossil record likely shows is the evolution of populations of early Homo, in Africa and Eurasia, toward the more ‘advanced’ H. erectus we know and love (due to gene flow w/in a widespread species, rather than parallel evolution of similar traits in different species).