Oh man, that was a bad joke. N. kerioi is an ape known from the site of Nachola in Kenya, dating to 17-14 million years ago. There is a fairly complete skeleton, KNM-BG 35250, and completeness is always exciting for the paleontologist. It seems to have had a fairly large and robust forelimb compared to its hindlimb, possibly indicating locomotor behavior unlike anything modern primate. Based on evidence from the skull and teeth it was likely a hard-object feeder, a characteristic in many Miocene hominoids starting with the 17 million year-old Afropithecus. Here’s a picture of the skeleton (Nakatsukasa and Kunimatsu 2009, Fig. 1): 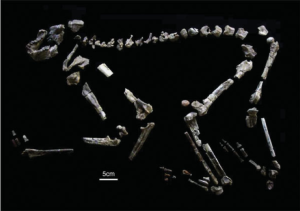 This specimen is the holotype for N. kerioi. A nice contrast to my last post griping about specimens that have been selected as holotypes.

3 thoughts on “What do you call a Middle Miocene hominoid that doesn’t belong to you?”