The vernal awakening has brought rain to Ann Arbor, and right on here on main campus I spotted the rain-splotched silhouette of an articulated human pelvis (left). 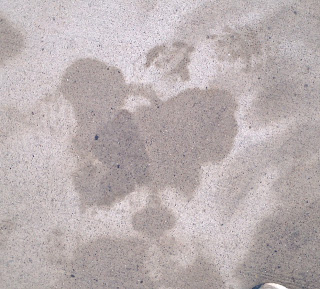 Check out those short and flaring iliac blades, and the shortness of the ischium. These features are associated with repositioning key muscles for walking and running on two feet, and are very unlike what is seen in the four-legged, suspensory climbing apes.

But just how ‘human’ are these features? The crushed pelvis of Oreopithecus bambolii, a ~8 million year old fossil ape from Italy, has somewhat human-like short ilia (left). This pelvis also has weak anterior inferior iliac spines (Rook et al. 1999), which anchor the hip/trunk flexor muscle rectus femoris, and are allegedly a developmental novelty seen only in hominids (Lovejoy et al. 2009). These traits have led some to claim that Oreopithecus was a hominid, or at least bipedal. Without getting into that debate, I’ll just say that seeing these ‘bipedal’ features in this late Miocene ape’s pelvis weakens the case that their presence in Ardipithecus ramidus indicates a unique connection between Ardi and later, true hominids like australopiths.

UPDATE: Check the comments for notes on the Ardi and Oreo fossils from someone who’s actually studied them (I myself have only seen pictures and read about them).

3 thoughts on “Osteology everywhere: Pelvis has left the building”