Some big changes here at Lawnchair Anthropology. I just successfully defended my dissertation (Mandibular Growth in Australopithecus robustus, more info on that to come), and moved to Kazakhstan to begin my new job in the School of Humanities and Social Sciences at Nazarbayev University. I landed in Astana about 22 hours ago, so I should be asleep, battling (or succumbing to) jetlag, but some friends have pointed me to newly published early Homo fossils from Kenya, dating to between 1.9-1.6 million years ago (Leakey et al., 2012). See Adam Van Arsdale’s blog, the Pleistocene Scene, for great historical background and perspective on these new fossils.

Now, one of the themes of my dissertation is that there is lots of interesting information to be gleaned from fossils that we’ve known about for a long time (many of the A. robustus mandibles featured in my research have been known for decades). But dammit if some of these much more recently discovered fossils point to tantalizing variation in hominids just later than 2 million years ago (note I’m careful to say “variation” rather than “diversity”). In light if this variation, Adam discusses the similarities between one of these Kenyan fossils (KNM-ER 60000) and the large mandible from Dmanisi, which was discovered in only in the year 2000 (Gabunia et al., 2002).

Piggy-backing off Adam, I’d like to point out similarities between another of the new fossils, the KNM-ER 62000 face of a juvenile, and the recently discovered A. sediba juvenile face (Berger et al., 2010). These two fossils are at the same stage of dental development, so they’re roughly at the same stage of life. They are close in geological age, but A. sediba is from South Africa. Below are figures of A. sediba (left) and the ER 62000 face (right). The pics should be to scale, modified from the original publications. (sorry I couldn’t remove the background from the top left one) 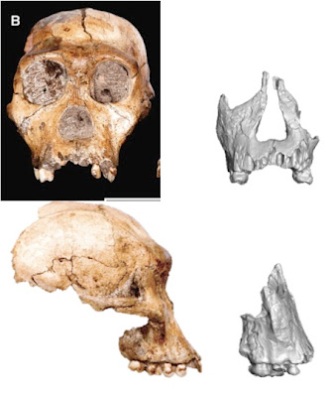 What do you think? Pretty different, right? WRONG! Below I’ve superimposed the ER 62000 face onto A. sediba (slightly recolored and transparented for contrast). Remember that these are to scale.

In front view (left), the ER 62000 face is almost identical to A. sediba, right down to the positions of the teeth. THIS DOES NOT MEAN THAT I THINK THESE TWO FOSSILS REPRESENT THE SAME SPECIES. In side view, however, some differences do become apparent. Notably, the front of the A. sediba maxilla projects a bit further forward than ER 62000, and the nasal and orbital anatomy are also fairly different. THIS DOES NOT MEAN THAT I THINK THESE ARE DIFFERENT SPECIES. (although I would be surprised if these fossils turned out to be the same animal)

Leakey et al. liken these new Kenyan fossils to the cranium KNM-ER 1470, from the same region and at 1.9 million years old. But what’s weird to me is that ER 1470 actually looks a bit more like the juvenile A. sediba in the side view (as reconstucted; the face and braincase of ER 1470 are actually separated, leaving it unclear just how the two parts fit together). Here are all three specimens, to scale:

Now, the ER 1470 comparison isn’t really fair – ER 1470 is an adult and it is much larger: the bottom of ER 1470’s eye socket is about the same height as the top of A. sediba‘s. The size difference is probably the main reason why its face below the nose sticks out as much as A. sediba‘s, even though the latter is smaller. (I should note, too, that the adult A. sediba mandible is superficially very similar in gonial and ramus anatomy to another of the recently published Kenyan specimens, ER 60000).

The point of all these comparisons is not to say whether these fossils are the same species, but rather to point out that there are actually striking similarities between fragmentary fossils, and it’s not clear what exactly these similarities (or differences, for that matter) mean. Maybe my eye was drawn to the ER 62000-A. sediba comparison not because of any evolutionary relationship, but because these fossils are in similar stages of growth and development – if it weren’t waaaaay past my bedtime I’d love to compare these fossils with other similarly-aged fossils (like D2700 from Dmanisi and KNM-WT 15000, also from Kenya).

All of these fossils (except ER 1470) were discovered in the past few years. I’ve said it before and I’ll repeat it now: this is a great time to study paleoanthropology.

2 thoughts on “These new fossils are intriguing as hell”