I don’t usually write about the moonscaped city I’ve lived in for the past 2 years, but I stumbled upon some osteology today worth sharing. Astana is an anachronism. The capital of Kazakhstan for only 16 years, the city sports a futuristic skin, glistening with Kazakh cultural heritage and thrust upon a Soviet skeleton. This place is a palimpsest, embodying the country’s rich history and spirited aspirations.

I live and work on the Left Bank of the Yesil River. Under constant development, the Left Bank often falls short of the metropolitan feel the city’s striving toward. But hop over to the other side of the river to the Right Bank, and Astana takes on a much more urban feel. This is the older part of the city (though this is still relatively young), and as such there are more people and there is more stuff.

Now, to combat my summer antsiness, I recently acquired a bicycle (velosiped in Russian), not so much for exercise but to explore this colorful city. (All the pictures in this post are a result of this acquisition) This morning I rolled onto what turned out to be Eurasian National University, and was surprised to find myself besieged by bones: 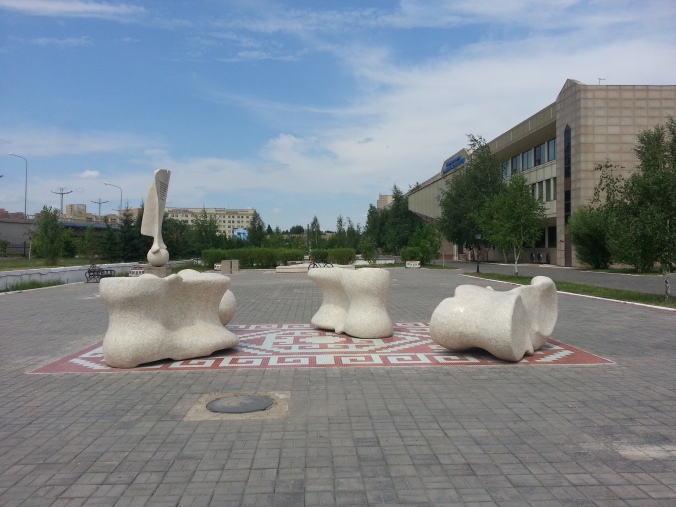 Unlike other Osteology Everywhere posts, where I think I see bones in quotidian sights, these objects are indeed bones.

In the spirit of the bone quizzes on Bone Broke Blog, I challenge you to tell me what these bones are. There are four of a kind on the red and white tiles in the foreground, and a taller one stood upright on a sphere in the background. Can you identify 1) what bone each of these is, and 2) the animal they come from? Bonus points if you can specify which side of the body. Here are some other views:

Finally, although only mildly related but because it’s totally badass, here’s a picture of lightning I snapped during a storm last week: