Last week Nazarbayev University hosted an Instructional Technology Showcase, in which professors demonstrated some of the ways we use technology in the classroom. This was the perfect venue to show off the sweet skeletal stuff we study in Biological Anthropology, through the use of pretty “virtual” fossils. In the past year I’ve started using CT and laser scans of skeletal remains to make lab activities in a few classes (I’ve posted two here and here). Such virtual specimens are especially useful since it is hard to get skeletal materials and casts of fossils here in the middle of the Steppe. These scans are pretty accurate, and what’s more, 3D printing technology has advanced such that physical copies of surface scans can be created from these virtual models. So for the Showcase, I had a table where passersby could try their hand at measuring fossils both in hand and in silico.

Lower jaw of an infant Australopithecus boisei (KNM ER 1477). Left is the plastic cast printed from the laser scan on the right.

The Robotics Department over in the School of Science and Technology was kind enough to print out two fossils: KNM ER 1477, an infant Australopithecus boisei mandible, and KNM KP 271 a distal humerus of Australopithecus anamensis. They used a UP Plus 2 printer, a small desktop printer that basically stacks layers of melted plastic to create 3D models; they said it took about 9 hours to print the pair. Before the Showcase, I measured the computer and printed models on my own for comparison with published measurements taken on the original fossils (KP 271 from Patterson and Howells, 1967; ER 1477 from Wood, 1991). The virtual fossils were measured using the free program Meshlab, while basic sliding calipers were used to measure the printed casts.

I was pleasantly surprised at how similar my measurements were to the published values (usually within 0.1 mm), since it means that the free fossil scans provided by the National Museums of Kenya are useful not only for teaching, but potentially also for research.

The Virtual Paleontology Lab. The Kanapoi distal humerus is held in the foreground while the A. bosei jaw rests on the table. Yes, those are real palm trees.

Knowing that these models are pretty true to life (well, true to death, since they’re fossils), I was curious how students, faculty and staff would do. I picked two fairly simple measurements for each fossil. None of the people that came by to participate had any experience with bones or fossils, or measuring these in person or on a computer. Here are their results: 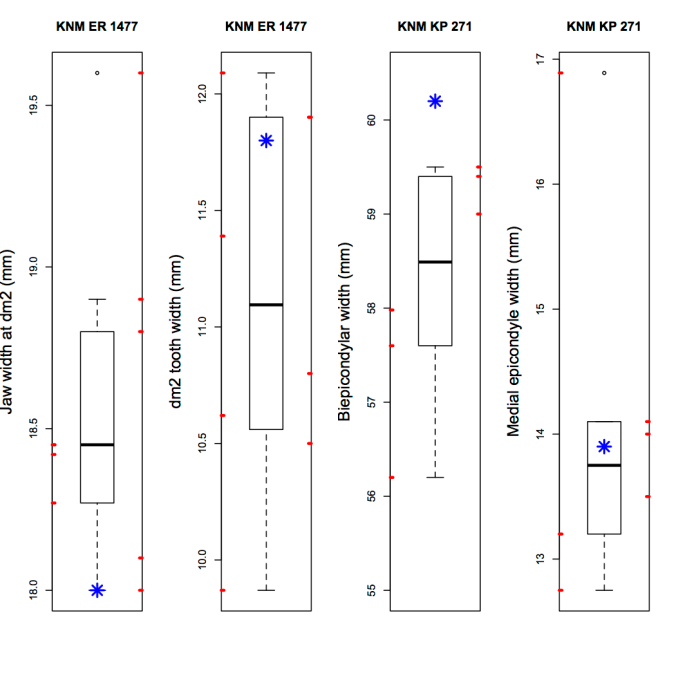 Boxplots showing participants’ data, for two measurements on each of the fossils. The blue stars mark the published values. The red rugs on either side indicate measurements taken on the scans (left side) or printed casts (right).

For the most part, the inexperienced participants’ measurements are not too far off from the published values. There’s not really an apparent tendency for either cast or computer measurements to be more accurate, although measurements of the Kanapoi humerus are closer than the computer measurements (third and fourth boxes above). In my personal opinion, nothing beats handling fossils (or casts of them) directly, but this little activity suggests students can still make reliable observations using 3D scans on a computer.