A paper was just released that showcases the technological prowess of two captive bonobos (Pan paniscus), the famous Kanzi and the less famous Pan-Banisha (Roffman & al. in press). It’s a neat paper, and I don’t really have much to say about it, but I will pass on what I enjoyed most about it (abstract and keywords): 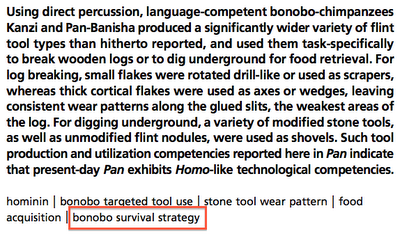 What’s the strategy – not living in the DRC? (sorry, too soon). But seriously, it sounds like a rock band or something. You don’t see key words/phrases like that every day. Or ever?

Paniscus’s palate for primates
Much buzz in the past few days has stemmed from recently published observations of bonobos (Pan paniscus) hunting other primates (Surbeck and Hohmann 2008). It is not news that bonobos actively acquire and eat vertebrates. But they’ve never been observed to hunt and eat other primates, as is very common in their ‘common’ chimpanzee cousin (P. troglodytes).

This should not be too big of a surprise, considering that P. troglodytes hunts primates fairly often. The authors of the paper opine that this is the first evidence for bonobo primate-hunting simply because they are not as well-studied as chimpanzees, which is perfectly logical.

So what can we take from bonobo-primate hunting? As it stands I think it is probably completely irrelevant for discussing human hunting behavior. First, whereas humans and Pan separated several million years ago, the two Pan species have been diverged for ~1.2 Ma (based on genetic data, no fossils…), so the primate-hunting seen in Pan might have arisen after the Pan-human split. Furthermore, to my knowledge humans’ hunting is quite different from that of Pan. Human hunting is more efficient in terms of energy expenditure and intake. Arguably human hunting is more dietary, whereas Pan’s has been argued to be more of a social thing. My point is that I don’t think hunting here can necessarily be looked at from an evolutionary perspective–as though hunting in humans and Pan is homologous (due to common ancestry).

I think the social implications of this paper are, however, very interesting. In chimpanzee hunting, males are the hunters. In the observed instances of bonobo hunting, females were actively involved, and successful in hunting. Could this be related to the relative female dominance in P. paniscus, compared to the male-dominated P. troglodytes society? Interesting…

Early Homo in the House of the Rising Sun
Journal of Human Evolution has also presented some interesting papers recently. Most recently, the earliest evidence of Homo in Asia has been estimated at 1.7 Ma (Zhu et al., in press). Incisors and stone tools of early Homo from Yuanmou Basin in China were dated to 1.7 Ma by the paleomagentism. Earth’s magnetic polarity reverses every now and again, and this signature of polarity of reversal is recorded in particle orientations of many types of rocks. The sequence of polarity reversals in geological deposits at sites that can’t be radiometrically dated (i.e. Yuanmou Basin) can be compared to sequences from radiometrically-dated sites, as a way to estimate the absolute age. How nice of the Earth to give us such handy clues! So Homo in China, Dmanisi (W. Asia), and probably southeast Asia shortly after 2 Ma. Early Homo just booked it out of Africa–couldn’t take the heat, I guess.

There are other things, but I’ll have to get to them later–time to get to class. Also I spilled coffee on my computer a week ago, so it’s in the shop. That means that I don’t have access to my Endnote, so citing is a pain in the buttocks. Here’s a pathetic, rushed attempt at citation: