For decades people have debated whether Australopithecus afarensis was an obligate biped like us, or whether our ancestor was a little less lithe in life on land. They asked, sort of, “Would Lucy have rocked some sweet Air Jordans, or would she have put some flat-foot orthotics in her new kicks?”
Carol Ward and colleagues report on a new fourth metatarsal of Australopithecus afarensis from Hadar in Ethiopia, over 3.2 million years old. The foot bone shows that A. afarensis had the two foot arches that we humans enjoy today.
Metatarsals are the longbones comprising much of the foot right before your silly-looking toes. One exceptional thing about our metatarsals compared to our ape cousins is that they contribute to two arches, one running front-to-back and another side-to-side. The arches provide critical support to our foot for bipedal stance, and a little Fred-Astaire-springiness as our foot hits the ground and then lifts off again when walking and running and sashaying. 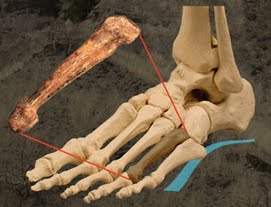 The new A. afarensis metatarsal (AL 333-160, right) shows that by 3.2 million years ago, our ancestors had these arches, too. The twisting and angulation of the shaft relative to the base show these arches are similar to humans and our later fossil ancestors, whereas apes’ MT4s tend to be less twisted and angled. Such morphology was hinted at by the famous Laetoli footprints from Tanzania, around 3.7 million years ago, also attributed to A. afarensis. Other evidence from the skeleton suggested Lucy was a biped and nothing else, and so this new find from Hadar further solidifies the idea that some of our skeletal adaptations to bipedalism are ancient indeed.
UPDATE: Thinking about this finding in the shower this morning, I recalled that buddies Jerry DeSilva and Zach Throckmorton recently published a study where they concluded, based on the morphology of the end of the tibia, that A. afarensis probably had at least a rear-foot arch. Interestingly, though, they found some hominid specimens probably had “asymptomatic flatfoot.” Lucy (AL 288) was among these, so maybe she’d be sporting orthoticized Jordans after all.
AL 333-160 image: Carol Ward and Kimberly Congdon (http://news.sciencemag.org/sciencenow/2011/02/lucy-had-a-spring-in-her-step.html?ref=hp)